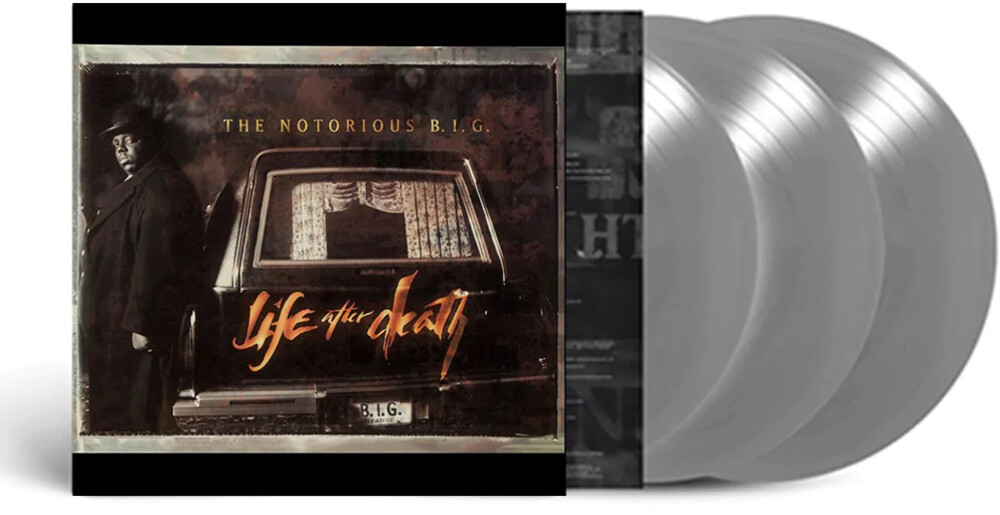 Limited silver colored vinyl. Biggie's second long-player was a huge slab of hip hop featuring a whole range of guests and a whole load of hits. The ambitious album, intended as somewhat of a sequel to Ready to Die, picking up where it's predecessor left off, sprawled across the span of two discs, each filled with music, 24 songs in all. You'd expect any album this sprawling to include some lackluster filler. That's not really the case with Life After Death, however. Like 2Pac's All Eyez on Me from a year before, an obvious influence, Biggie's album made extensive use of various producers - DJ Premier, Easy Mo Bee, Clark Kent, RZA, and more of New York's finest - resulting in a diverse, eclectic array of songs. Plus, Biggie similarly brought in various guest rappers - Jay-Z, Lil' Kim, Bone Thugs, Too $hort, L.O.X., Mase - a few vocalists - R. Kelly, Angela Winbush, 112 - and, of course, Puff Daddy, who is much more omnipresent here than on Ready to Die, where he mostly remained on the sidelines. It's perhaps Puffy himself to thank for this album's biggest hits: Mo Money Mo Problems, Hypnotize, Sky's the Limit, three songs that definitely owe much to his pop touch. There's still plenty of the gangsta tales on Life After Death that won Biggie so much admiration on the streets, but it's the pop-laced songs that stand out as highlights.
This website uses cookies to personalize content and analyse traffic in order to offer you a better experience.
I accept Learn More
back to top